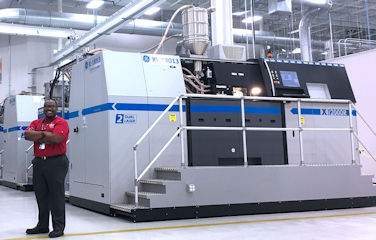 Up to ten GE Catalyst components will be produced in this area. The engine’s first flight is scheduled for the end of 2019. It is the first turboprop engine in the world with almost 30% of its internal metal parts 3D printed. In Brindisi, work has already begun on three of these ten additive components. This number will continue to grow as the number of GE Additive-Concept Laser machines DMLM (Direct Metal Laser Melting) does.

The team is led by Additive Manufacturing Leader, Dario Mantegazza, and explains that technological and operational interchange is at the heart of the collaboration between the teams in Italy and those at the Additive Technology Center (ATC), an ultra-modern plant established in 2015 about 10 km from GE Aviation’s world headquarters in Evendale (Ohio, USA).

The ATC is a center dedicated entirely to the technology that has broken the traditional paradigms of industrial production, as well as of mechanical design. Approximately 85% of the products processed at the ATC are destined for the aviation market. “We are currently working on products for about ten military and civil aircraft programs, including the newest and most advanced ones, such as the LEAP, GE9X and of course GE Catalyst. In addition to production, Digital IT, R&D and Engineering teams work here, too,” says Antroine Townes, Plant Leader at GE Additive’s cutting-edge center.

On december 5, 2019, the Aerospace 3D Printing Conference will take place at RAI Amsterdam, The Netherlands.